A vote for change

From a distance you would’nt know that there was a garden at all. The garden of Thea and Dirk van Maldegem lies like an oasis in the flat agricultural countryside of Walcheren, one of Zeelands many islands. All you see from afar is a shelterbelt of shrubs and tall white poplars. Those poplars are precious; they were amongst the first trees planted after the inundation of the island towards the end of the 2nd World War, when all vegetation was killed by seawater.

Within the shelterbelt the garden exists of two parts which gradually merge into one another: a formal garden full of mixed borders, and a small wildflower meadow, sloping towards a large pond. Here drifts of Leucojum aestivum flower on the ponds margin, while anemones and snowdrops are naturalized underneath the poplars which break the salt-laden winds. Since my last visit, eight years ago, the formal part of the garden has changed drastically. 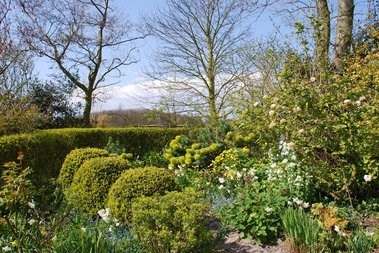 Why these alterations?
Thea: It’s not just the garden that changed. It’s us as well. We are in a different phase of our lives now. When we started the garden 30 years ago, we had children. Now we have grandchildren. Then our aim was enclosure. Now we feel the need for more openness and space.

So there was a gradual evolution?
Dirk: No, not at all. It all started when our box became ill. The leading theme in the garden was the intricate pattern of box hedges.

Thea: We panicked. We sprayed the box with fungicides, even though spraying was against our convictions. To no avail. We cut the hedges back but they did not really recover. We waited for a year, wondering what to do next. Then we decided to change course. The box went. At first it was painful, but soon it felt like a liberation.

Dirk: We realized that our ideas about the garden had evolved. Some parts of it felt oppressing, like wearing a pair of shoes that is too tight. Changing the garden was not just a physical excercise. We had to let go of old ideas. People change and so do gardens.

So what did you alter?
Thea: We made all the paths wider and left out hedges where they were before. The grandchildren love to race round the garden and in the old garden that was impossible.

Dirk: Before we ripped out the box it was difficult to get around with the wheelbarrow. Now it is a lot easier.

Who pushes this wheelbarrow?
Dirk: We both do. We share the coarse maintenance, like clipping the privet hedge, mowing the grass and keeping the paths free of weeds. And since I retired three years ago, I enjoy this more and more. When we started out I disliked gardening. In our family children were forced to help in the garden which bred an active dislike. When we moved here I told Thea: you do the garden.

Thea: One of the good things about gardening together, is that it it brings you closer to one another. It is not just the garden that changed. Gardening can have a positive influence on a relationship. In our case anyway. With others it might lead to divorce.

Have you been influenced by other gardens at all?
Thea: You cannot help being influenced, even if it is subconsciously. And of course so many new plants are available compared to 30 years ago. I love experimenting with new bulbs and perennials. 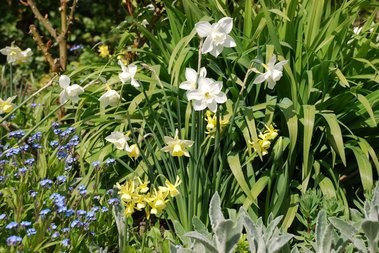 Your garden is announced as an ecological cottage garden, can you explain?
Dirk: It’s just a label. We did not think of that ourselves. We found our garden announced in a magazine like that. We read that we were opening to the public without knowing it ourselves. What could we do but open? The label stuck. But it is true: we live in a cottage and we do garden ecologically right from the start.

What about the ecological part?
Thea: We feel strongly that one should not use pesticides and herbicides in a garden. Gardening should not aim at destroying the ecosystem. Surrounded by farmland as we are, it is not possible to create a complete biological equilibrium. But that does not stop us from trying.

The wildlife in the garden is nothing special: the usual animals like newts, toads, weasels, hedgehogs and quite a few birds like woodpeckers and tree creepers. A big thrill this last summer was the discovery of a hornet moth, a rare moth which looks like a hornet and which only occurs on poplars. Ours, in this case.

Are you already preparing for spring? (the interview is in november)
Thea: Yes; each year I plant some tulips and a lot of small bulbs for naturalizing. That is where my heart lies. Scilla’s, Corydalis and anemonies sow themselves and show development in that way. Tulips are static, and have more decorative than ecological value.

Dirk: And of course the apple trees need pruning.

Nevertheless there are tulips everywhere. What effect are you trying to achieve?
Thea: I scatter the tulips in the garden. I do’nt want a bulb field. I like the combination of tulip flowers and the foliage of perennials like bronze fennel, paeonies and Euphorbia dulcis ‘Chameleon’. For height I use Euphorbia characias ssp. Wulffenii.

How do you maitain a densely planted garden like this?
Thea: No one is allowed to weed but me. It is nearly impossible to move within the borders. To quote a friend: ‘I wish I was a ballerina, so I could dance between the plants.’